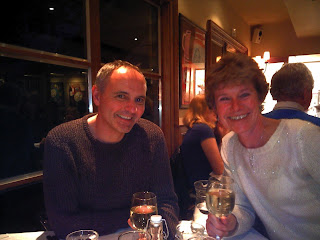 14 glorious years today - spent a lovely evening with Susan and Paul in Oxford.
Tried to make up for missing Orange Wednesday by doing Saturday Cinema. Watched Le Havre which was an unusual French language film that ended very unexpectedly.
We were surprised to be suddenly out on the pavement, and then went straight for dinner at a French bistro where we were served by a waiter with a strong French accent.
It happened so quickly it almost felt as if the film had come to life and we were now part of it. Quite surreal.
Nice meal in a fancy part of Oxford and then sat on the front row of the top deck of the bus on the way home.