Daz decided to put in the shower screen in the house main bathroom, which I like to think of as 'my' bathroom.

It is a lovely quarter circle screen that we bought as ex display from a local store.

He fixed the two metal uprights in place on the tiling then called me to help put in the screens. This involved two pieces of glass and the top and bottom rails that were all screwed together to make one large, wobbly and fragile thing. 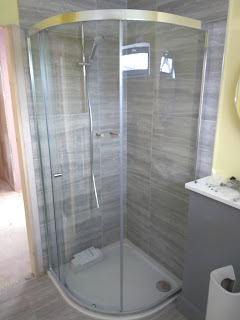 We lifted it up between us and carefully tried to push one end in to place. There then followed at least twenty minutes of arguing how best to do it, pushing, shoving and balancing before it finally slipped into place.

Phew, and I hadn't even finished thinking to myself 'that is never coming out ever again', before Darren announced that it was upside down.

After nearly screaming in frustration we pulled it back out, gingerly turned it the right way up and then started the process of getting it back into place.

I don't know if our technique was better, or if it had bent into the right angle, but it went in much more easily second time around.

It looks fantastic, and he has also put up a handy shampoo bottle holder too.