Yesterday I spotted a sign to say that the local Bathstore was closing down and that there was 70% off everything left in the shop. Today we cycled over as we thought that we might buy a toilet for the Welfare Hut on the plot.
Instead we got a bit carried away and bought one bath, three basins, three toilets, three towel radiators, two heated mirrors, one bathroom cabinet, one rainshower attachment, one standard shower attachment, four taps and all the bits, two soap dishes, one toothpaste mug and one toilet roll holder! 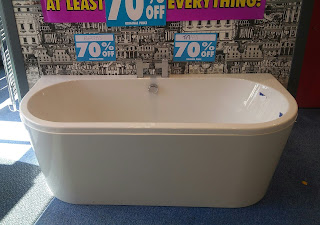 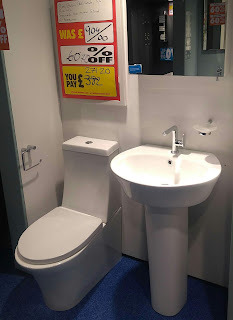 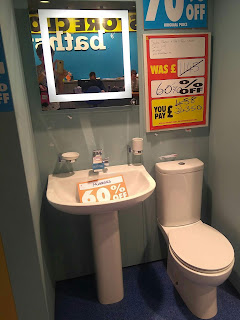 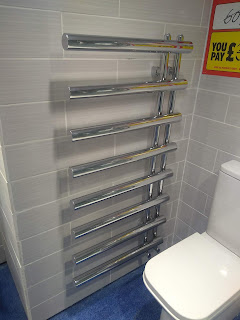 All in the space of about an hour and for around £1,400 excluding VAT.
Tomorrow we have to go back to take it all off the walls, and then we will probably have to hire a van to get it home!
Posted by Christine at 09:38 10 comments:

Very many thanks to Susan for stopping by our plot to take a couple of photos for us. Also thanks to Graven Hill who sent the drone up and got loads of fantastic aerial shots. 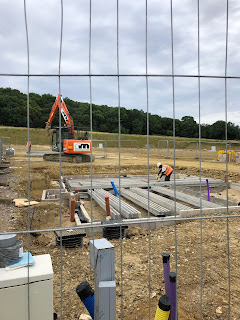 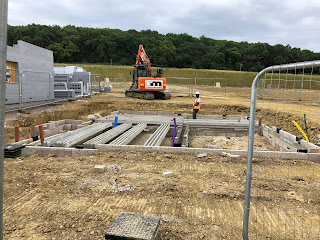 The outline is starting to appear and we are looking at the view of the front of our house from the pavement. 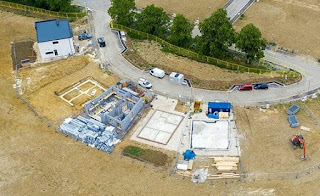 Our house is the outline to the left of the grey building.
The countdown is continuing and all being well the plot is handed over to us in about three weeks time.
How exciting.
Posted by Christine at 06:23 No comments:

After our visit to Cleethorpes we drove to our hotel in Grimsby. We are staying in the newly renovated Wetherspoons Yarborough Hotel, and very smart it is too. The bedroom and ensuite have given us some ideas for our house build, and the ladies toilets in the pub are the smartest and fanciest that I have ever seen.
Unfortunately the same can't really be said about Grimsby Town, but we had a walk around and saw the sights.
Best was a beautiful fishing boat outside the fishing museum. 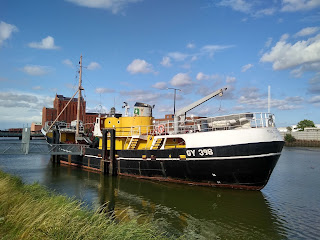 Moving on to today, we had a quick coffee and went to the start of the race.
Once again, as in a race nearby last year, our race numbers were number two and three, based on our surname. This race was much bigger and the competitor numbers went up to 4,000 and I noticed people looking at us in the mistaken belief that we must be elite runners. 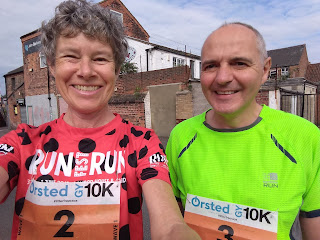 We did well and overall Darren finished 320th and I was 921st, but somewhat short of our race numbers.
It was really hot and humid and I had a nightmare from about the 7th to the 10th kilometre, but all of that soon got forgotten, particularly with a pb each.
Mike paced Darren round to a fantastic 44.37, and I got 51.53. 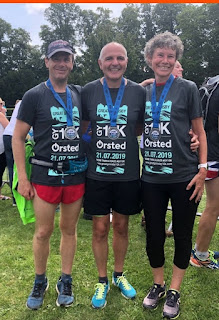 Posted by Christine at 13:49 No comments:

Cleethorpes is only two hours drive from home, but we had never been here before.
The main reason that we went was because it is next door to Grimsby - more about that tomorrow.
I spotted that Cleethorpes is on the Meriden line and exactly north of Greenwich, so I wanted to visit the little line on the pavement. Unfortunately it was pouring with rain and we ended up accidentally paying £2 to park near to the pier. 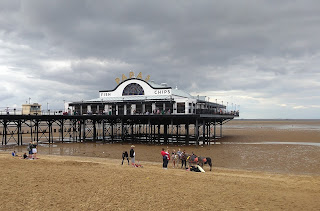 It's rather short, but very pretty and there was even a few donkeys giving rides up and down the sand.
Of course I had to have an ice cream and very nice it was too - English butter toffee. 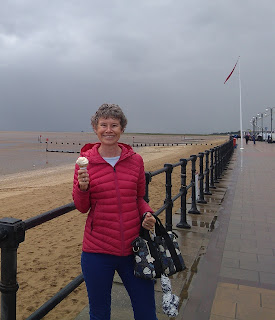 The tide was out so we only saw the sea from a distance, but we could also see right over to the other side of the estuary.
In the end we decided against walking up to the meridian line, so the best I can do is guess that we probably crossed it without realising quite where. 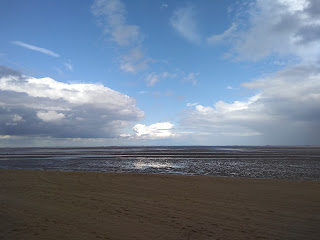 Posted by Christine at 12:01 No comments:

We are on our way home from our mini break and stopped off at the beautiful town of Richmond. None of us have been here before, but it seems like a good choice.
It has a lovely artisan shopping area in the old train station, so we parked up and set off to explore. 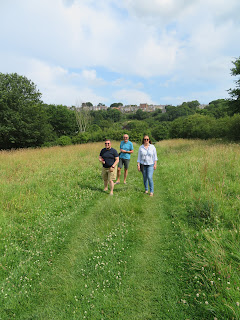 We walked along the river in a clear case of de ja vu dating back to Sunday.
Very different river views though, and a huge castle included as an optional extra. 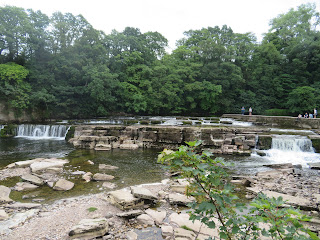 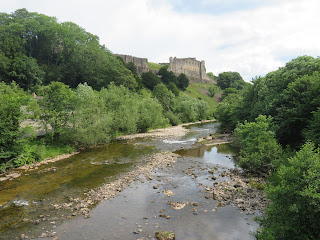 Back to the Station shops and we bought loads of cakes, bread, beer, ice cream and a few goodies from the gift shop.
Quite a profitable day for Richmond.
Posted by Christine at 13:50 No comments:

Angel and Lady of the North

Arrived at our destination on the outskirts of Newcastle last night and had a big celebration dinner - with drinks - for Tina and Matt's anniversary. Felt a bit a bit delicate this morning, but we had to crack on as we had a busy day ahead.
First stop was the Angel of the North. Apparently 33 million people pass by the statue every year, but we were some of the lucky few who stopped to explore. 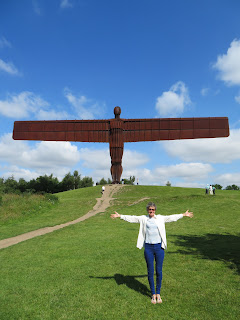 I tried to take a selfie but kept pointing my camera in the wrong direction, so eventually Daz came to my rescue and just took a photo, very nicely framed too. 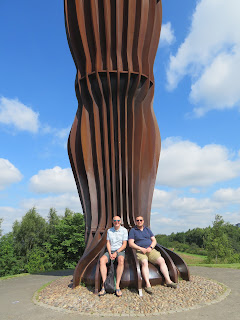 Here he is again sittings on the Angel's toes to give an idea of the scale.
Next stop was the lesser known Lady of the North at the Northumberlandia site. It is a 46 acre community park with a stunning landform of a reclining lady. So said the guidebook.
Tina said that she needed a good trim, and in reality you have to use your imagination to find her whole body. 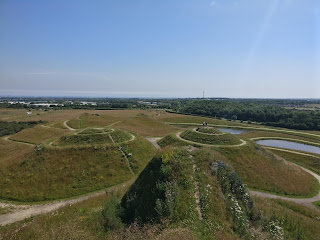 Darren is taking this photo standing on her forehead with her nose in the centre. We are waving from one of her boobs, and way off in the distance are her knees. 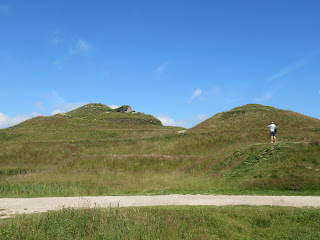 In this photo you can see her face and nose on the top left, honestly.
Next up was the main event of the day, Alnwick Gardens. They were absolutely magnificent and everything was in full bloom. 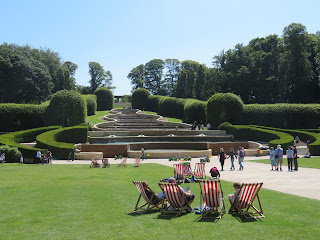 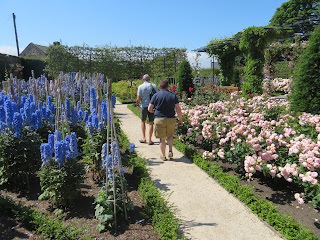 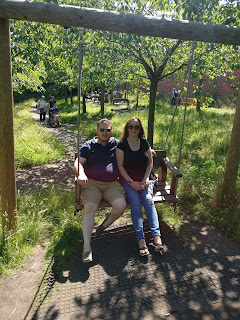 Final stop was the pretty seaside town of Amble where we ate ice creams on the seafront. It's only now that I realise that I forgot to take a photo.

Posted by Christine at 13:43 No comments:

Off on a little jolly up north with Tina and Matt. Took an enormous detour to get there via the famous Hardraw waterfall.
Never heard of it? Try telling that to Kevin Costner who in the guise of Robin Hood, fought Little John there on a tree trunk over the river.
This was probably in the early 1990's,but as a claim to fame its quite a good one.
We visited the waterfall at the end of the valley where after winning his battle, Kev took a shower in its cold spray. 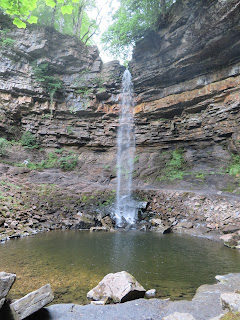 We didn't try and copy him, but instead were transported back in time in the local 16th century pub.
It was a warm sunny day outside, but the pub was freezing cold inside and the locals were all enjoying a friendly drink in front of a roaring fire.
The landlord had a huge handlebar moustache and the customers around the bar all had their own little tins of snuff. 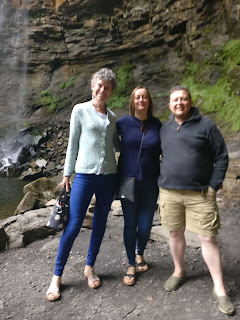