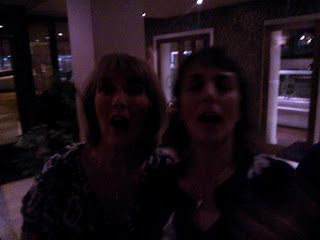 Went to Arnold tonight to celebrate Linda leaving the Halifax after 35 ish years! (I only managed 18.)
Darren and I had only just bought a drink  and was chatting to Linda at the bar when Daz realised his phone had been stolen out of his jacket pocket.
He had to dash home to cancel it, while I phoned and left an abusive message for the thief, telling him there was a tracker on the phone and I knew where he was and would be coming to get him.
It must have done the trick as when Darren arrived home he found that someone had got there before him and put the phone on charge.
Linda was really worried about him, more than I was, and was so relieved when she heard all was well.
Here she is with Janet in a rather poor photo as the flash wouldn't fire.
Posted by Christine at 15:00