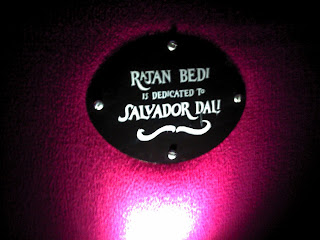 Wow, wow, wow - what an unbelievable film.
Had a lovely curry at 4550 miles to Delhi, a very nice coffee at The Broadway and then went to get our seats for the film.
The lady checking tickets cheerfully told us that a lot of people walked out of the earlier showing, but didn't say why and anyway, we had already paid.
Chose our seats and weirdly, some of them had little plaques on the back, a bit like park benches that are dedicated to people who have died.
Ours said 'Rajan Bedi is dedicated to Salvador Dali' with a little moustache drawn under it. The weird thing is that he is our upstairs neighbour. That's Rajan, not Salvador.
Anyway, the film was about a very rich and powerful man who decided he wanted a haircut. 20 minutes in I couldn't care less about his hair so had a little snooze. I woke just in time to be jealous of the three people sitting in front of us who got up and left.
The film dragged on and his day went badly downhill. He lost all of his money betting on the money markets, shot and killed his bodyguard and got half of his haircut.
I won't spoil the end but we got there eventually. The remaining customers all charged for the exit and bonded, with everyone talking at once about how much they hated it. Never known that happen before.
I disliked it even more than The Avengers, which says it all really.