The Devil's Bottom and other dark caves 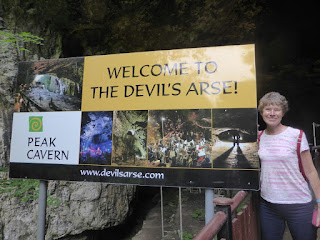 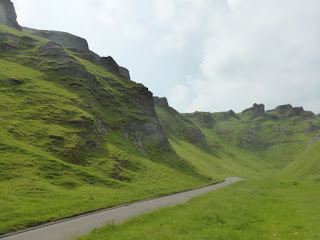 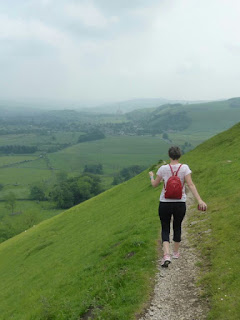 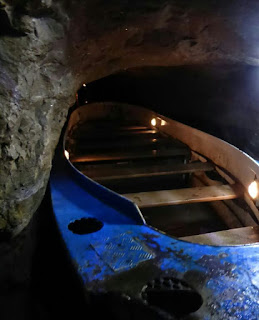 I really don't want to lower the tone of this blog, so I have amended the name of a cave that we visited this afternoon.
It acquired it's name because water often floods into the cave through a small hole, and then gradually drains away through the same hole. As it drains it makes a loud, unsightly noise and hundreds of years ago people used to believe that the devil lived at the bottom of the cave, and the proof was that they could hear him going to the toilet!
It wasn't a very picturesque cave, but it was livened up a lot by our very sarcastic and entertaining guide.
He also showed us how the locals used to make ropes in the dry cave entrance, and as I volunteered to help him, he gave me the rope that we made together as a gift.
I was pleased with it, but Daz wasn't quite so much as it definitely had a 'farmyard' smell about it and I stored it in his backpack for the day. Don't know what I am going to do with it now though.
We then had a nice walk around Winnats Pass, and a visit to a second cave - it sounds rather keen but we got a discount for buying two together.
This one was the Speedwell Cavern and we had to walk down 106 steps to a hidden canal. It was built and used by lead miners about 200 years ago, although it was unsuccessful as very little lead was actually found.
We sat in the little boat and were carried to a large cave where we stepped out to look at the so called Bottomless Lake.
It was called bottomless because the miners believed that it was, and that the devil lived in it. Our guide said that two devils was probably at least one to many for a small Derbyshire village, but there you go.
Ps, I haven't had a competition for ages, so the first person to comment wins a handmade rope.