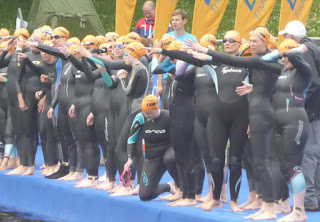 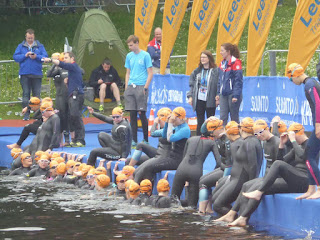 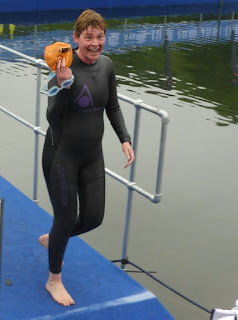 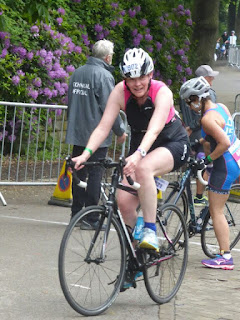 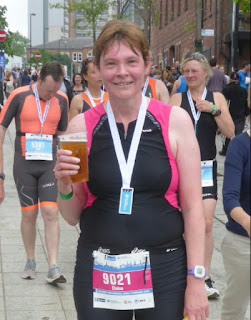 Today we are supporting my sister at the World Triathlon Event in Leeds. I must say that although she is good, she isn't a professional athlete and is entered in the amateur races, along with 5,000 other competitors.
They set off in groups of about 40 to swim around the lake at Roundhay Park. Elaine was with a group of ladies and we watched from a distance as they all stood around chatting and making friends as they waited to be called to the lakeside.
They then seemed to be having quite a discussion as to which direction they were going to swim. Some of them also appeared to have second thoughts about getting into the cold water, but they all made it - and then they were off!
All went well and Elaine climbed out in the middle of the pack and cheerfully made her way to the transition area.
We waited at the start of the bike section and in less time than expected, she appeared and leapt onto her bike.
Unfortunately, she was in the wrong gear and had a difficult time getting up the steep hill, but she dug deep and was soon on her way.
This was our cue to get on our own bikes and try to get to Leeds city centre before she did. We had an advantage as we took the direct line, while Elaine was on the long route with the other competitors.
The city centre was very busy and lots of the roads were closed, so we completely lost track of her. Suddenly she appeared in the distance and was running straight towards us.
I had no time to take a photo so we charged along the pavement trying to guess her route and take short cuts to get ahead of her.
I got level with her right near to the finish line but she turned a corner into the finishing straight and I wasn't allowed any further.
Five minutes later she appeared with a big smile on her face, a blue medal around her neck and a pint of what she promised us was alcohol free lager.
All in all a very good result.
She was outdone though by the Brownlee brothers a couple of hours later in the professional event, as they dominated the race and won the gold and silver medals.