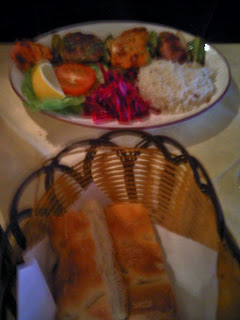 Not written anything since Sunday, not done anything noteworthy - I know that's not stopped me before - but a quick catch up.
Had a better night out last night than expected.
Went for a Turkish meal opposite Cineworld - see photo - and it was fantastic. Loads of free extras - olives, chillis, carrots, bread, Turkish delight and cherry brandy!
Eventually got round to seeing Batman. Got there a little late so all of the normal seats were gone. Had to sit separately, and I ended up about 10 feet away from a screen that was probably 15 feet high and 30 feet wide.
Hated it at first as I watched the adverts as it was so massive and blurry. I could only focus on a corner of the screen at a time and had to sit sideways and look at it out of one eye.
Much has been documented about the slow pace of Batman, but it actually helped as I could see each scene in detail and open both eyes without feeling dizzy.
A bit of a crazy plot, with a lot of mentions of characters I did not know. Also predictable plot lines at times, but Wollaton Hall looked great.  Batman was very sulky, and after being a sedentary recluse for eight years, he put on a knee brace and became a super hero!
Ridiculous nuclear bomb section and it's set up for another sequel, which I can't stand, but....
I actually enjoyed the experience, the noise, the gigantic screen, the weird characters and the atmosphere.
Must have caught me on a good day.