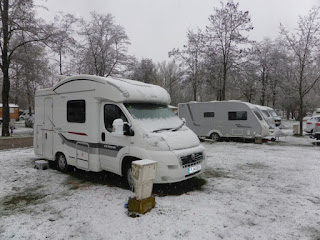 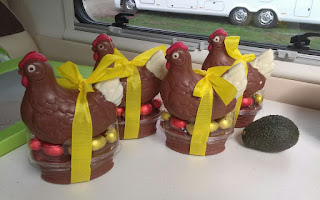 Darren has had to return to England to attend an important meeting, so I dropped him off at Madrid airport a couple of days ago. Before he left he set the sat nav to take me to my next campsite.
If you have been following this blog you might remember that the sat nav and I are sworn enemies, but I thought that in Darren's absence we could come to some sort of truce.
All was going very well and I was only four minutes drive from the campsite, when the sat nav directed me into a country park. To cut a long story short, it was illegal to drive in the park, as three separate Spanish people told me quite forcefully as I frantically tried to get out of it.
Both the sat nav and one of the Spaniards said that the best way out was by driving along a two lane cycle path through a wood, which I shakily did.
I emerged back onto a real road very upset and hating the sat nav even more than usual.
Check in at the campsite went well and I calmed down, then after an uneventful evening I went to bed.
I was woken in the night by a huge clattering on the roof and hailstones hurling themselves at the van. I listened in astonishment and once that had quietened down a thunderstorm started up, with bright lightening flashes and loud crashes quite close by.
Eventually I nodded back off to sleep and the next morning when I opened the blinds I found that I had been snowed in! This sort of thing never happens when Darren is here, so feeling a bit depressed and alone, I headed out through the snow to do a bit of shopping.
In Lidl I spied a display of sad looking Easter chickens that nobody had wanted, so to cheer myself up, and for a bit of company, I bought myself a small flock - see below.
They were excellent if quiet company all last night, but this morning the sun came out I didn't notice that they were getting a bit hot.
I realised just in time that they were melting and that one head had nearly fallen off!
I had intended them to be free range chickens, but what I had to do was scrape them off the table, push them back into shape and shove them all into the fridge.
They are still there now and they all looked at me accusingly a few minutes ago when I got some milk for a coffee.
I will let them out again tonight once it is dark and hope that they forgive me.
Ps, thank you to Darren's sister for her kind offer to lend me a guinea pig, but I will pass on that for the time being.