Today was the day that I have long looked forward to - my 100th official parkrun.
We had an early wake up call at 6.30am and hoped to be in a taxi to the start just after seven. A bit of drama occurred because we couldn't get a taxi from the hotel so had to walk along the street until one eventually stopped for us.
The pre run briefing was in full flow by the time we got there, and soon we were ready for the 7.30 start.
I was quite unsettled by the rush and the complicated course which had one right hand lap, then three laps on the left and finally a right hand turn back to the finish.
I surprised myself by starting strongly and there were lots of volunteers who pointed out the route and took photos.
I soon got really hot and tired but pushed on and eventually I crossed the finish line in a reasonable time of just over 26 minutes. 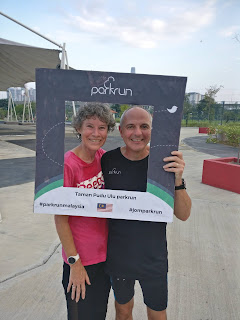 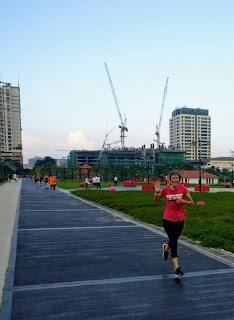 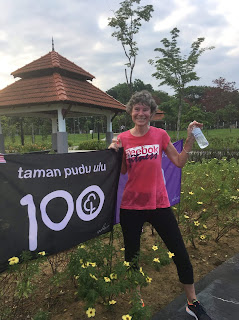 Darren told the race director that it was my 100th run so she got the flag out especially for me and when the results were posted I was thrilled to find that I was the first lady.
Hooray!! What a great day.
Posted by Christine at 06:09