Today we went on a narrow boat cruise along the Llangollen canal.
We did the cruise first and then discovered more about the canal later, so in the interest of providing more information, I will start at the end of our day and work backwards.
The Llangollen canal was designed by Thomas Telford of the Industrial Revolution fame.
He designed the Horseshoe Falls to separate enough water to start his canal and did this in the most stunning way. 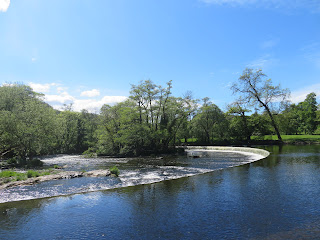 Most of the water falls into the horseshoe shaped section and heads down the river, but exactly the right amount is channeled off to start his canal.
The water then runs along the canal channel and is the only canal in Britain with a current. We were told that the canal drops one inch in every mile, and that is enough to move the water along at about one mile per hour.
There was no locks in this section of the canal and once we were on our narrow boat cruise the water helped us gently along, and we only occasionally used the engine. 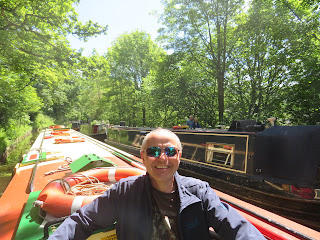 When I say we, I actually mean our lady captain who very skilfully sailed us along the very narrow canal and she often had to avoid the amateur drivers who had only hired their boats for a few days. 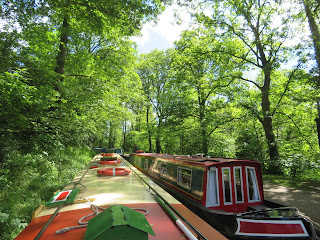 The highlight of the day was going over the Pontcysyllte Aqueduct which spans the river Dee at a height of 126 feet. All that kept us in the air was a narrow metal channel that was less than an inch thick. 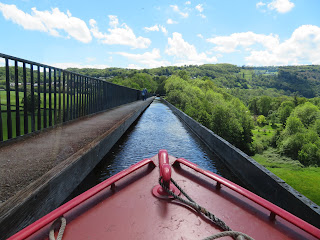 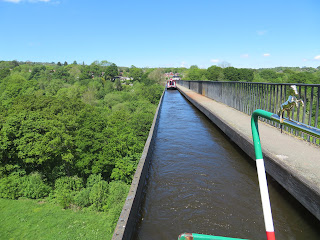 It was so peaceful floating along, but it was also quite nice to make it to the other side. 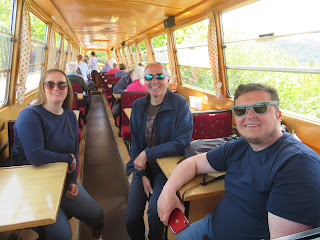 Finally we caught a bus back to the lovely little town of Llangollen where we started our journey. 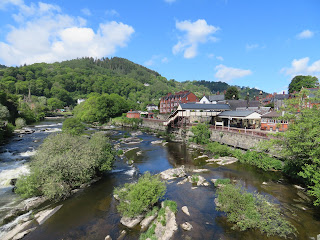 Ps, sorry for the old fashioned measuring system, it seems that they haven't gone metric yet in Wales.
Posted by Christine at 10:15