It's getting boring now

Still more rain, still no bricklayer.
Apart from that, it was a dramatic delivery afternoon.
I had three deliveries due, ten tons of sand, 400 blue bricks and lots of miscellaneous - cement, lime, wood, concrete bricks, paving slabs, etc.
We had it all planned out and the sand was due to go one side and everything else the other. It couldn't be swapped because of manhole covers that would be in the way.
Darren went off to pick up some essentials from town and I arrived at the site to find that the bricks had already arrived and the delivery driver had craned them over the fence and dropped them exactly in the sand pit.
Action stations. I raced around carrying five at a time and moving them out of the way. I had no idea how long it would take to move 400 quite heavy bricks, but it turns out that in an emergency it is just over half an hour. 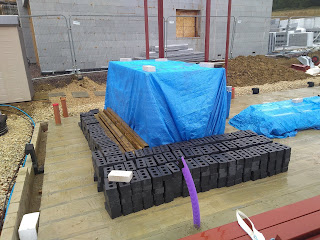 Unfortunately I got soaked in the pouring rain, as I spread out the tarpaulin ready for the sand. 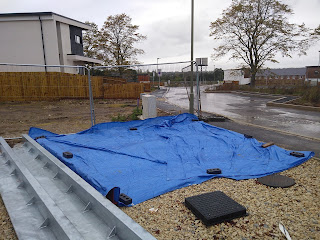 I then found out that the greenhouse was completely flooded again, so stomped around putting back the little stream to divert some of the water. 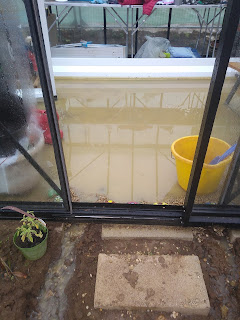 A few minutes later Daz arrived and then the sand truck.
It only took a couple of minutes and, hey presto, ten tons of sand exactly filled the space. 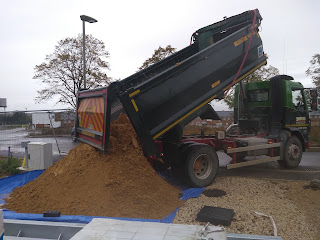 Just time for a quick sandwich and then all of the rest arrived. We covered it in another tarpaulin and then left as the rain really set in for the day.