After ten days isolation, I am back in the real world again.

I did consider getting up really just to go for a walk around the estate in the fresh air. However, the sun doesn't rise today until 8.06am, so a six o'clock start in the dark would not be great.

Also, I sensed that Darren wouldn't be keen, and I wanted to walk with him. In the end we went at around sun rise, but it was very cloudy so we didn't see it, but at least it was light.

Next item on the list was a trip to the Garden Centre. My sister had bought me a lovely plant pot for my birthday, my mum and dad had given me some money, and Margs and Dave gave me a voucher and I put it all together to create this. 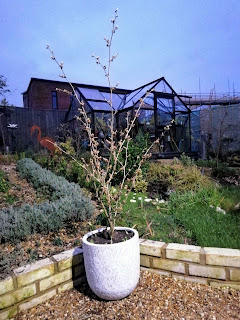 It's a witch hazel tree that should soon have acid yellow spiky flowers, surrounded by snowdrops and miniature daffodils. It will look less like a dead twig in a few weeks so if I remember then I will post another photo.

And I forgot to say that Darren also got creative last week and has made a bug house for the garden, in the shape of our own house! 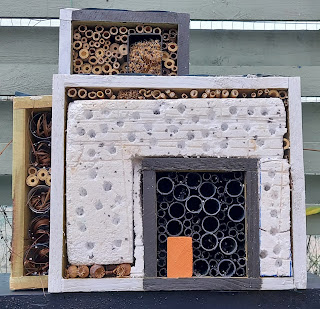 Apparently all of the bugs are already hibernating this year, but once they wake up then I am certain that they will be eyeing it up as a good place to sleep next year. I am a bit unsure about the holes drilled in a piece of insulation, but it should certainly be nice and toasty.