A couple of days ago Darren won an eBay auction and bought some new tools. I don't know exactly what they do, but there is a lot of them, and so we drove to Hastings to collect them.

Never one to miss an opportunity to see the sea, we turned it in to a day out, and the sun even shone on us too.

We got there about an hour early and headed straight for the pier. Although much better than the one last week in Skegness, there was not that much on it.

We did find a nice little coffee shed, and then a dog walking lady suggested that walked further down the pier to shelter from the wind behind a disused building. 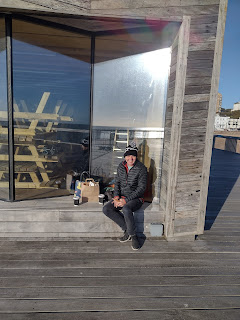 It was a lovely sun trap and we finished our coffee and cakes, and then went our separate ways.

I went for a sightseeing walk along the seafront. 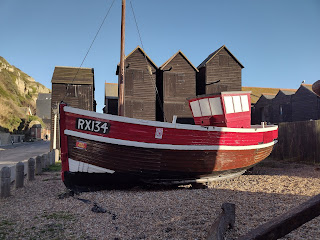 Darren drove up to the seller's house to collect the tools. This is a true story, but the guy does not use them because he chopped some of his fingers off and although they have been reattached, they aren't as good as they used to be.

Ps, I don't know if it happened with the things that Darren bought or if it was using something else.