Back again after a break last year, yes, it's the Santa fun run! 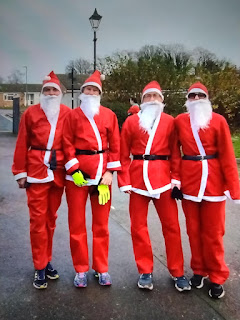 Looking good in our costumes and raring to go. From the left Darren, me, Paul and Susan.

I learned a lot from last time when the outfit kept trying to self destruct on the run, and this year I safety pinned the jacket together and wore my own belt, which was a lot more heavy duty than the little one supplied. We also put the trousers on once we arrived at the start as last time we had ripped them quite badly during the cycle ride over.

Here are all of the Santa's on the start line and I have circled the four who I think are us. 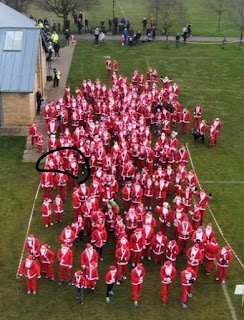 Definitely not as many as last time, but still a good turnout. Seconds later we were off on a 4 kilometre route through the town, and it was nice to see lots of people on the pavements cheering us on and taking photos.

Darren bravely kept his beard and moustache on the whole way round, but I found it difficult to breathe so wimped out and dangled it under my chin instead. 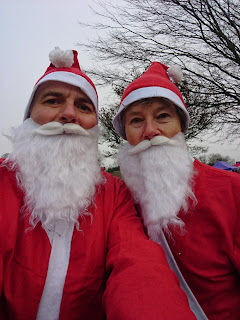 At the end we all got a medal, a bacon butty and a coffee, so smiles all round. 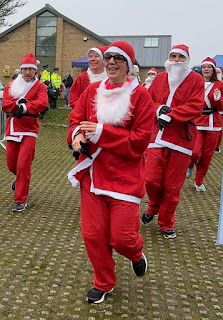