Updates to the cottage

We have spent the last few days planning how to update the cottage, and the ideas are coming thick and fast.

Darren has taken out three wardrobes to give us more space, and because they were not particularly nice. We know that they were put in in September 2002 because the workman had filled a gap in the wall with the Daily Mail newspaper with the date on it. We have also visited the neighbours in three of the four cottages in our row, and have been impressed with the exposed stone walls.

It has inspired us to get hacking and the sounds of hammering and coughing from the dust have filled the air for most of the week. 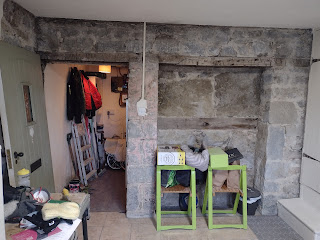 It all needs to be sanded and repointed, but we are amazed by the size of some of the stones. A lot of the plaster was really thick so now the kitchen is also a bit bigger.

Our front door is very flimsy and I found a door advertised on Facebook that would be a perfect replacement. It was only £30 and we weren't sure if it was real, but we drove up to meet the seller who put double glazed doors in for a living and sells off the old ones.

It is a very good and heavy door, and obviously it didn't fit in the car. In the end we had to have about a foot of it sticking out the back of the car with the boot tied down with bungy cords. The boot catch was still banging up and down though, so I laid down on top of the door and held it steady all the way home.

Finally, we bought a flat pack bed from Ikea and managed to get all of the pieces up the tiny staircase. It is all built now and we are sleeping in luxury. 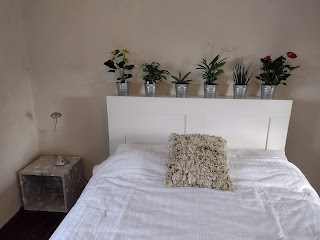 Ps, I got a bit carried away in the plant section.