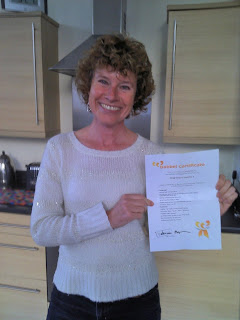 I have a new project.  It is to learn French before we spend the summer there next year.
Have got off to a flying start as I have an internet course called 'Babbel' and after only a week I have finished part one and downloaded a certificate to prove it!
I have also found a French tutor and I have just spent an hour and a half parlezing with him.
He asked me what I do for a living and I said 'Je suis une jardiniere' as I thought it sounded quite good and might well mean, gardener. He laughed and said that I had said 'I am a plant pot!' Voila! Ma tete, c'est fatigue.
Posted by Christine at 10:05