Very exciting day yesterday as our new stoves were due to arrive. We currently have electric storage radiators that are very expensive to run and not actually very good at heating the rooms, so we are looking forward to seeing a roaring fire and keeping warm.

The fitters arrived, put up a work tower and got straight on with clearing the chimneys. The first problem was that the chimneys didn't have cowls on the top and over many years jackdaws had dropped a mountain of sticks inside one of the them. This was discovered when the workmen took the cap off the base. They filled bucket after bucket with dry sticks, but eventually they got through to the top.

Then it was up on the roof to put the shiny metal pipe down the chimney, and to take off the old television aerial attached to the chimney. 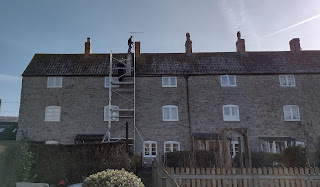 After that it was plain sailing and by the end of the day we had two beautiful new stoves. 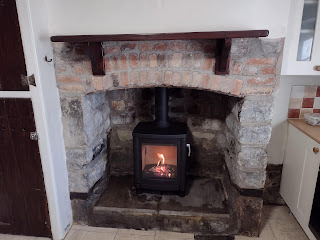 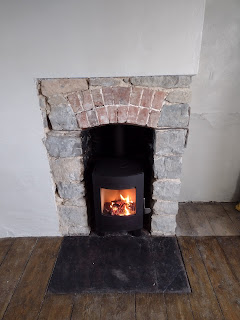 We are just getting the hang of lighting them and I have learnt one very important lesson - never put your finger on the glass at it is extremely hot. On the slightly plus side I may have burnt off my index fingerprint, so I could consider becoming an international spy.

On the not so good side, it appears that the old aerial on the roof was the one that worked and not the modern one that is still attached to the side of the house. Disappointing.