I will just list the top three things that we did in London in the last two days.

Firstly, we went to the theatre to see a matinee of Pride and Prejudice, Sort Of. This was completely fantastic, just five women playing all of the parts, plus all of the musical instruments as they turned the book in to a musical, and all of the servants who don't even get a mention by Jane Austin.

We were right at the front to one side so couldn't see all of the stage, but it was great to be so close to the action. It was over two and a half hours long, which is usually way too much for me, but I was sad to see it end and the standing ovation was well deserved.

The next morning we went for a jog along the Thames - always very scenic, but also a challenge because of the endless building work. We had to keep taking detours off the route and at one stage we ended up in the middle of a dual carriageway. To escape, Darren had to give me a leg up on to a pretty high wall, climb over it himself then help me jump down the other side on to the pedestrian path before we could carry on. 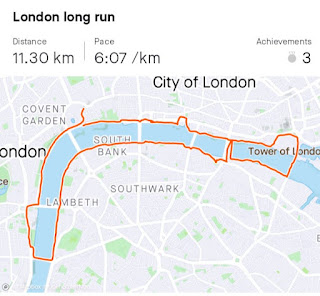 Thirdly, this morning we walked to a fancy Indian restaurant called Dishoom. On the way we passed the Seven Dials monument and it's really interesting as seven streets with angled buildings all meet at the same junction.

The restaurant opened at 8am for breakfast and was really lively. We ordered Bacon naan and mango lassi and it was all extremely tasty. Afterwards we had a quick wander around Covent Garden, but it was a bit early and most of the shops and stalls were not yet open, so we headed to the station for the train home.