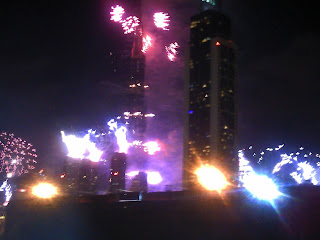 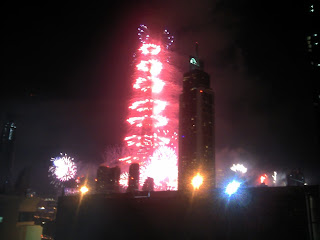 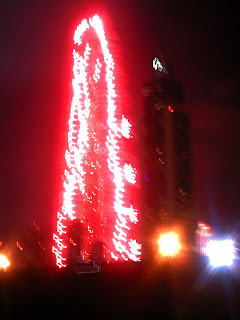 We are very lucky indeed as Darren has booked us a hotel nearby, and he was also charming when we checked in so we have a room with a prime view of the tower.
We went out earlier to see if we would be able to get a good view of the fireworks from the shopping mall under the Burj.
We caught the metro but unfortunately, although we actually got on the packed tramcar,  it sailed straight past our stop and on to the next one, which meant that now we were much further away than when we set off!
The crowds were massive so we just joined them in walking. At one stage there were that many people that we all just walked straight across a four lane major highway and all of the cars had to stop and honk their horns, but everyone just laughed and carried on.
It became obvious that we wouldn't see a thing at the mall, so we are back in our room with the window open, enjoying the view and having a nice glass of port.
Fantastic fireworks and the pictures don't do them justice.
Just like Nottingham really.
Happy new year to everyone!!
Posted by Christine at 12:12