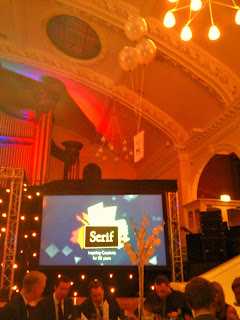 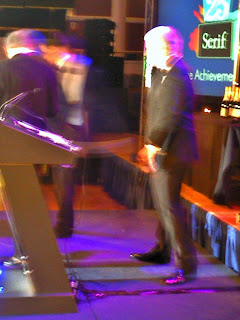 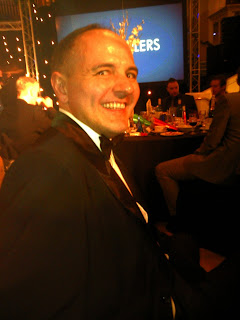 After 25 years and leaving work yesterday, Daz won the lifetime achievement award at Serif.
I was on hand to capture the moment but pressed the button a millisecond too late. (That's him just walking off the stage)
We also spent half of the afternoon making the table decorations. They appeared to defy gravity and three helium balloons were attached with ribbon to a poster which was attached with invisible cotton to a branch covered with pretend snow that was standing in a three foot high vase.
Unfortunately between the two of us, somehow one of the posters and balloons broke away from the branch and spent the rest of the event on the ceiling.
A fantastic night that got quite emotional as Darren said goodbye to all of his workmates.