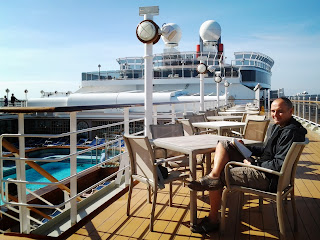 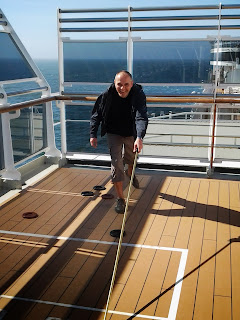 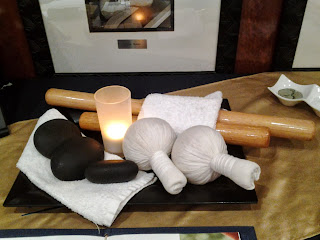 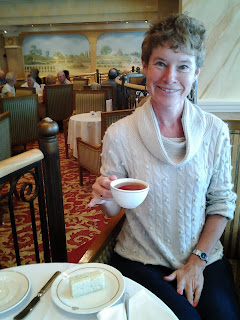 Our first full day at sea today as we head up the North Sea towards Stavanger.
It is a lovely bright day with a calm sea and we are enjoying the on board activities.
We started off with shuffleboard where the aim of the game is to push the counters down the deck on to a score board. We have never got the hang of this game and the first two rounds we both scored zero.
We then entered the ships paddle tennis competition and as there were only two other entrants we played them in the final and got an easy win!
Our prize was some points towards a present at the end of the trip - no idea what yet.
Darren then insisted that we rush down to the spa and gym where we had entered, along with many other people, the prize draw for free spa treatments. The only catch was that you had to be present if they drew your card. We had missed the first two prizes and were just in time for the last draw, where they immediately drew out Darren's entry!
His prize was a hot stone massage which he chivalrously gave to me. You can see the stones in my photo along with a couple of wooden truncheons and some cloth maracas.
It was lovely and I have just been hot stoned and now smell of lavender and frangipani.
We are now having afternoon tea, cucumber sandwiches and tiny cakes, although we can't sit here too long as we have to get ready for the Captain's party.