Captain's visit to the Faroe Islands 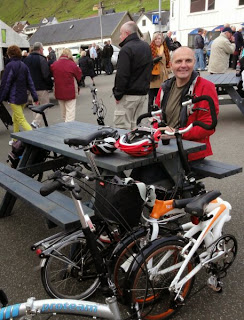 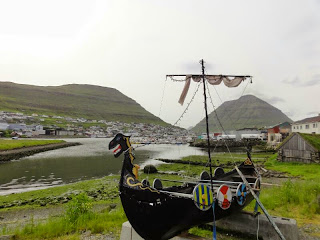 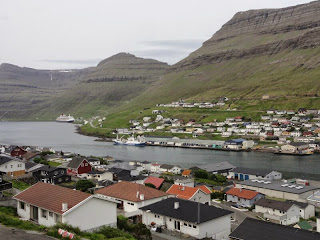 This is the first time that we have sailed on a ship with a lady Captain and she is from the Faroe Islands.
She has been really excited all day and has made announcements over the tannoy to tell us we were approaching the islands, and then came on to tell us a legend about a witch and a giant that tried to tow the islands to Iceland.
We stopped at the second largest town called Klaksvik for the evening. Apparently only 50,000 people live on the whole of the Faroes and the local community were out in force. They had laid on special events to make us welcome, as it is only the second time that a cruise ship has visited.
We cycled out as far as we could in each direction and went about 15 kilometres before we ran out of roads.
We then stopped at the main part of the town and chatted to some young girls who loved my bike, then  drank some reasonably priced red wine from a market stall. We chatted to a lovely local lady and her adopted Indian daughter called Karen and watched a fashion show featuring local hand knitted outfits.
The locals said they were so happy that the weather was so good for us tourists, but I sat outside in five layers of clothing and my gloves, so I would hate to think what bad weather would be like.