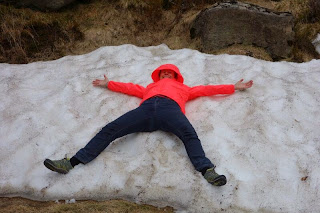 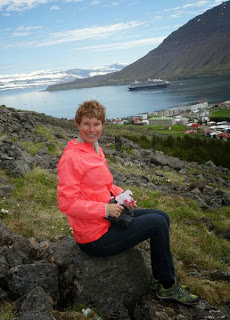 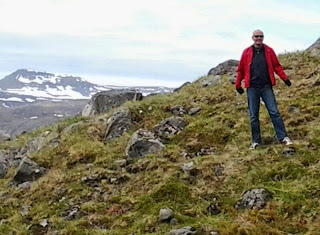 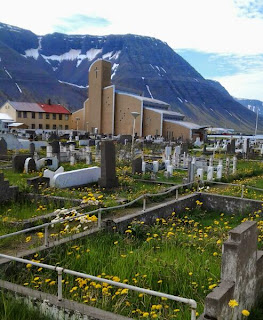 I had been waiting for the chance to do a snow angel and in loads of places that we passed, the snow came right down to water level. Unfortunately, everywhere we have stopped the snow has been high up the mountainside.
We found a small patch on our walk today, but it was a bit solid so I couldn't make the wing shapes with my arms. I also thought that I might make an elegant shaped angel, but it just goes to show how wrong you can be.
We are now on the north west coast of Iceland and we stayed up until midnight last night to try to get a photo of the midnight sun, but it was cloudy so we missed it - ditto the whales.
We are in Isafjordur on the Westfjords peninsula. There are 9,600 inhabitants in the region that is slightly larger than Cyprus. I got this info from the guidebook, but it doesn't help me picture it as I don't know how big Cyprus is, or how many people live there.
We went on a good walk today following blue paint marks on rocks across the mountain. We had no idea where it went but after about 40 minutes we met two people coming in the opposite direction who were also on our ship, so we were all pleased to learn that we were on a circular route and would make it back to the dock in time to catch the boat to Reykjavik.