A bit of a worrying day today. The rain poured down for hours and then we put on our waterproofs to go over and have a look at the plot.
Water was streaming off the clay sloping fields and a mini stream was pouring straight into the back of my greenhouse.  My boots sank nearly up to my ankles as I dug a new route for the stream and almost managed to get it to flow away through the flower bed.
Once inside the whole floor was flooded and I think that it had mainly come up from below.
I spent quite a while bailing out with a pot but eventually had to concede that as fast as I bailed, the water was still coming in.
I also had to rescue my new flowering plum tree that was totally waterlogged and falling over.
I did what I could and then went back to get a coffee and wait for the streams to subside.
A couple of hours later we returned and Daz had found his water pump attachment for his power drill.
After a few false starts it was pumping the water speedily out and things got back to normal, if quite soggy. 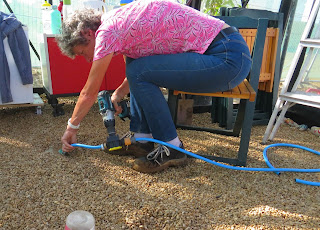 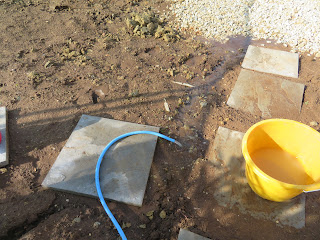 It would be nice if its dry tomorrow.
Posted by Christine at 14:11