This is a delayed post as I didn't realise that Darren had taken a photo.

This total chaos is the Somerdale Pavilion parkrun, although when you are running it it is very logical and it is actually one long route, not laps. The start is totally normal and then within 200 metres you reach the curly wurly. Basically it is a grass track that curls into the centre and then uncurls, but the runners never meet. Does that make sense?
I have my Strava of the route (only the red bits, no idea what the blue is). 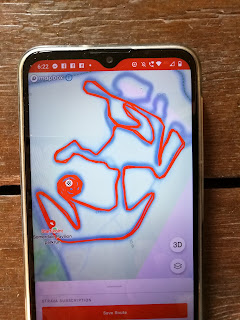 The curly wurly is run three times and the rest of the route is a mystery run.

At the moment I am following a training plan from Garmin to try to improve my speed, so as well as following the 5k route I had to do the first 1.5k really slowly, the next 2k as fast as I could and then the remainder slowly again. It was a bit embarrassing suddenly overtaking loads of runners and then just as suddenly slowing down and them overtaking me again, but if I stick to the plan then in 12 weeks time we will see if it has worked.

Another exciting event in the evening, as we were invited to our neighbours birthday party in a marquee on the marina.

First guests to arrive on the green carpet were the ducks, 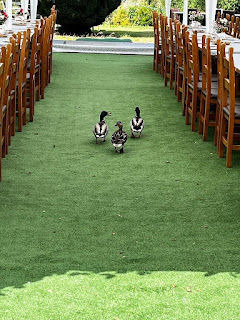 but we got there a little later,

and then we saw the balloonist who didn't get an invite so just sailed past.

A very nice night and a good chance to get to know our neighbours.