Twenty million wildflowers were planted in the moat at the Tower of London to celebrate the Platinum jubilee. Unfortunately the weather was really bad for growing seeds earlier in the year, so they weren't quite ready for it.

They are at their best now though, and we had tickets to wander amongst them today. Darren was initially disappointed because he thought that they were going to be like the metal poppies from a few years ago, but he got to like them in the end. 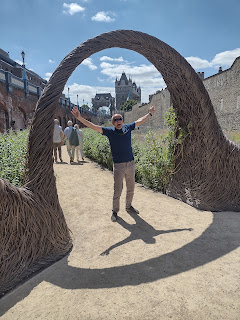 There was also an old fashioned slide where you had to sit in a sack to slide down, and after queueing for ages amongst lots of school kids we eventually got have a go.

We also found a friendly Beefeater who was willing to pose for a photo.

He was a lot younger than I expected, but I think that I was mixing Beefeaters up with the Chelsea pensioners.