A nice outing today in the Chilterns. We are walking a circular route of the reservoirs around Tring, mainly along the Grand Union Canal.

I am in charge of the route and we have 21 places of interest along the way.

This photo may have been taken just before I walked straight into a bush while trying to read interesting facts to Darren without stopping.

This bridge is particularly interesting and annoying at the same time. 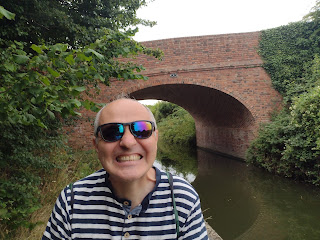 Behind Darren is a bridge that was built at the same time as the canal in around 1790. After the canal fell into disuse the original bridge was demolished in 1973, even though lots of people said that the canal would be reinstated in the future. Then in 2001 the whole thing was beautifully rebuilt and here it is today. I think that was interesting fact number nine.

Some facts were more interesting than others, and this was number 15, a good view of a nice reservoir.

The water level is definitely very low, but fortunately just as we arrived at fact number 21 it started to pour with rain and we ran to a pub to take shelter under the flowery pergola.

After a nice warming cappuccino I asked the waitress the way to the car park where we had left our car, and it was just around the corner, less than 40 metres away.