A couple of days ago Darren got an offer for extremely cheap tickets to see Michael Buble at the nearby Waddesdon Manor. Originally priced at £85 each, they had not sold out so were almost giving them away to ensure that the venue was full.

I like Mr Buble, so even though the weather forecast wasn't great we decided to go for it. Gates opened at 5pm but it was pouring with rain then, so we decided to leave at 6pm to arrive at 6.30. Obviously a lot of people had made the same decision and to compound that issue, the postcode for the car park was wrong.

Actually it was right, but the organisers had decided to turn the main entrance road in to an exit only. We didn't know that so joined hundreds of other cars in a massive and mostly stationary queue to get to the wrong place. Once there we had to do a u turn and join the almost stationary queue on the other side of the road that was going the opposite way.

It took almost another two hours to get to a parking space, and it had also rained most of the way, but by the time we stepped out it had stopped.

We set off walking and then reached the beautiful stately home.

We got through the entrance and just had a minute to take another lovely photo of the house and the biggest fish and chip queue in the world. 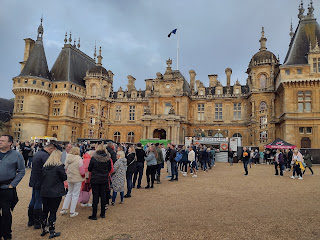 One second later the music started and the huge screens lit up with Mr Buble. At first I thought that it was a video, but no, the concert had begun!! It was exactly 8.30pm and a lot of people were still arriving, but it soon all settled down and it was really good. 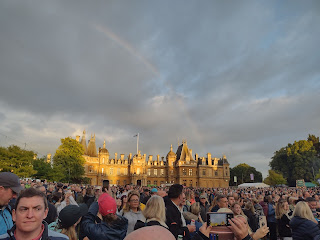 As soon as he finished his last song we started the dash back to the car, along with lots of other people. We couldn't even consider waiting for the encore, and this was the right decision because we sprinted through the car park and then got out fairly quickly.

It would have been chaos behind us as, there was only one way out and even that was really slow moving because buses were trying to get in the opposite direction on a single track road! I can't imagine who thought that was a good idea.

It only took 20 minutes to get home, and with hindsight we sat in the comfort of our warm and dry car right up until the start of the concert. Seeing as the other option was to stand in the rain for two hours (and they confiscated all umbrellas), then I think that we did very well.

Ps, they have offered us tickets for Tears for Fears, Alfie Boe and McFly over the next three nights, but I couldn't cope with doing it all again.