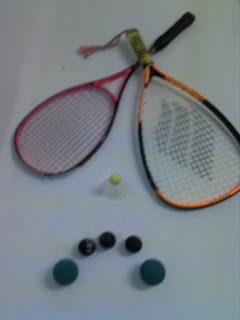 Played one of my league games today and had been warned by another player in the league that he was pretty good, and he had lost to him, so to watch out.
The catch is that he is nine years old and only came up to my armpits.
He was very confident in the warm up and I was already starting to run through  excuses to explain my demise.
But, I didn't lose, I actually beat him very quickly and there were tears welling up in his eyes.
Anyway, his dad said it was 'character building' - not sure what his mum will say about me when he gets home.
Ps, he'll be beating me within six months.
Posted by Christine at 09:27