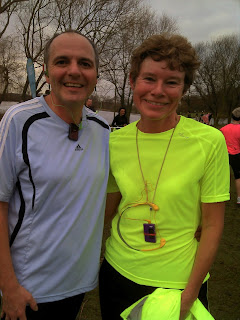 Much better weather for the run this week and I have been out practicing since last time.
Mike paced Darren and I around the course. I managed to hang on for just over two miles and then we were overtaken by a runner pushing his baby in a very large pushchair!
This may have demoralised me slightly, but a gap began to open and they both then kept pace with him.
I kept going and did a reasonable 'sprint' for the finishing line but there is a Stewards Enquiry over the published results.
Darren and Mike finished in 27.10 and they timed me 32 seconds behind them at about 27.42. However the official results list me as 29.07! This is not as bad as a friend of theirs from work who is down as finishing in over half an hour but who was actually ahead of me.
Computers - who would trust them!!
Still very pleased with my run, so going to eat like a pig tonight at Jamies.
Posted by Christine at 08:23