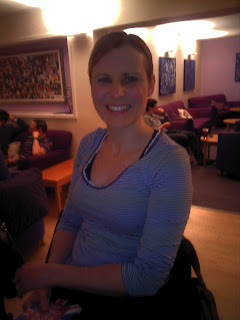 Just preparing for a bog standard night in last night and of getting the tea ready while Darren went to play Macrina at racketball.
He rang to tell me she had some news so instead I hurried down to the club to get the gossip.
Not only had Dan proposed on The Park Steps after a lovely meal at Harts, but he had also been over to see her family and asked her dad's permission first!!
It makes our sneaking off to Las Vegas seem a poor effort in comparison.
Sorry the ring does not feature in the photo but it is a beautiful diamond solitaire.
Aaaaaaahhhh!! In a romantic smiley way.
Posted by Christine at 01:59