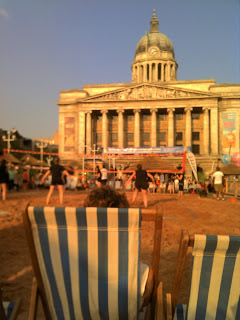 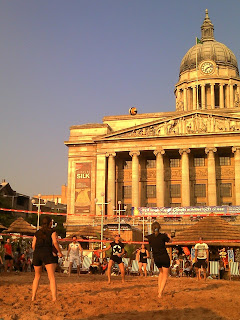 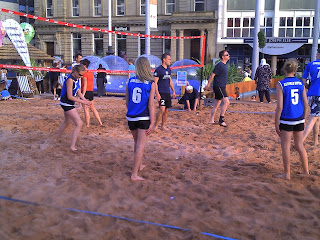 Despite saying I was looking forward to this weeks Orange Wednesday and Batman, I have had some enormous second thoughts.
Darren told me that Robin isn't in the film, apparently no one says 'holy sausages' or anything similar, and there is no nanananananana batman music.
Susan went to see it and thought I might like it even less than The Avengers, so Darren thought it wouldn't be pleasant taking me, even though I did promise to try and be enthusiastic.
Our alternative entertainment for the evening was beach volleyball in our front garden.
It was arranged by Notts Volleyball Association and they were pretty good. No bikinis, but that's probably not a bad thing. I was cheering for the team called Darkstar, but I don't know if they won because right at the crucial point, some guy sat down in the deckchair next to me and started telling me all about his arthritis.