Parkrun in about 27 minutes 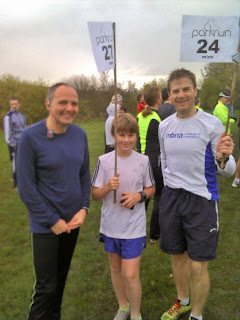 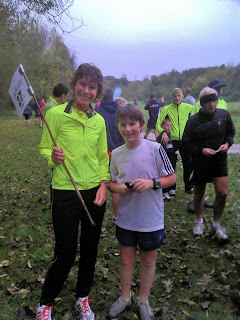 Haven't done the Parkrun for ages as had achilles issues, but went this cold, rainy morning.
Mike and his family were all acting as pacers. Mike was on for 24 minutes, Kieran was 27, his mum was 40 and his dad was the Tailender.
Daz ran with Mike and I set out to keep up with Keiran.
I struggled along for the first half, then hit a good patch. Keiran was counting down each minute until we were due to finish and there was quite a crowd running around us. At the last turn he said '400 metres to go, so run ahead if you can'. I said I'd wait until 200, so he shouted it then. I tried to go, overtook a few people but then hit the wall. Keiran drew level and I finished a couple of metres behind him.
Just seen the results and I came in 90th place in 27 minutes 15 seconds.
Thanks Keiran.
Ps Daz got 57th place at 24.37
Posted by Christine at 05:17