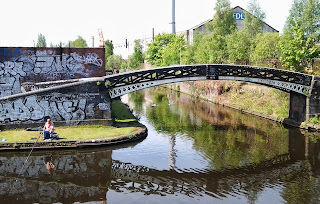 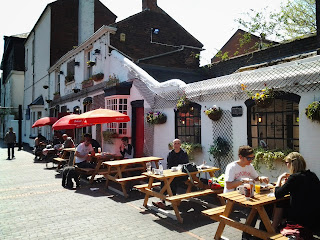 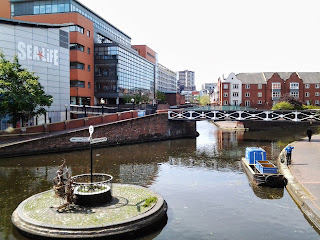 I always enjoy cycling along canals as I love the water, the wildlife, the scenery and the fact that they are flat.
I was keen to cycle the Wolverhampton to Birmingham canal yesterday as I had read that it was a nice journey. I ended up regretting it though as the whole area seemed a bit sinister. There were no houses or buildings along the banks, but lots of high fences and the back of factories.
There was almost no one about apart from very occasional dog walkers, all of whom were pleasant, but who owned frightening looking Staffordshire Bull terriers. I am not good with dogs at the best of times, so I kept tactfully holding back until Darren had cycled past the dog and then I shot by as quickly as I could.
We then spent the night at the Waterfront in Walsall. This was a modern area with room for plenty of boats, but not a single one in sight. It was a bit depressing as we left this morning and all that was in the water was floating litter.
It soon perked up in Birmingham though and the place was buzzing with loads of people enjoying the canals and the weather. We were only two amongst many cyclists and we stopped for a lovely breakfast at a canal side cafe.
Had a nice and easy cycle, as we should on a Bank Holiday Sunday, and arrived at our hotel near the NEC feeling quite perky and with 32 miles on the clock.