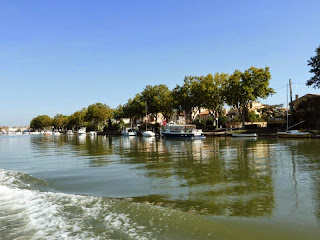 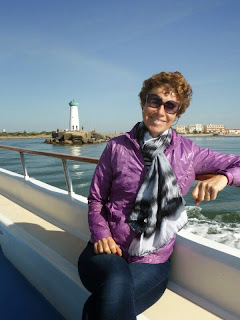 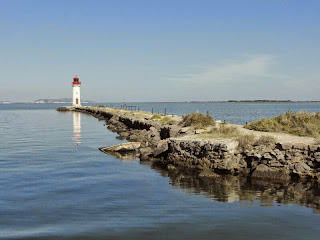 We are now in the town of Agde which is almost on the Mediterranean coast, and it also has the Canal du Midi running through it.
We joined a bus load of French pensioners for a boat trip today. The weather was bright and seemingly warm, but our first section of the trip took us out to sea and round an island that used to be a prison.
It was very breezy and poor Daz was freezing in his trendy shorts.
Back inland it was my turn to be too hot as we then spent ages goung up in a large round lock and the sun beat down on us relentlessly.
After that we set off again and the temperature nanaged to find a happy medium.
We chugged along the Canal du Midi and into a large sea water lake where we saw oysters being grown on long pieces of rope.
Our captain spent ages explaining the whole process, but it was in French so we didn't follow it very well, if at all, to be honest.
Then, 'surprise!', we all had an oyster to taste, but both of us chickened out, although all of the French tucked in very happily.