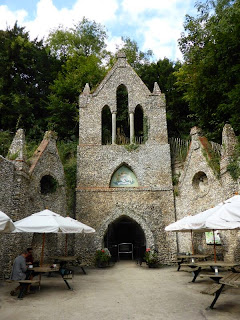 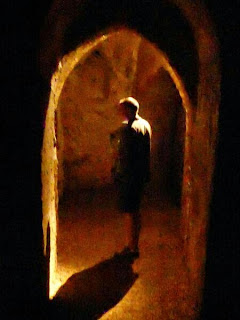 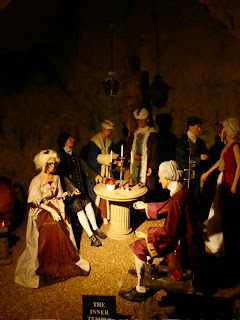 After the Tour of Britain we cycled on to our next destination - Hell Fire Caves.
The caves were excavated in about 1750, to provide chalk for building local roads.
The entrance to the caves is through the middle door of what looks like a ruined spooky church. Once inside there is a long tunnel leading underground, with lots of little rooms, hidden niches and a large round cavern.
They were used by the secretive and allegedly outrageous Hell Fire Club.  The club was full of MPs, local aristocracy and judges and they held banquets, dressed in strange outfits with masks and carried out occult rituals.
The caves are now supposed to be one of the most haunted places in England, and it is possible to stay the night, in the pitch black. Apparently, no one ever sleeps peacefully!
We were the only people around and it was quite near to closing time, so I made sure that I stayed close to Daz and Susan as I didn't want to get left behind by mistake.