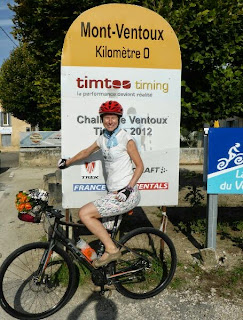 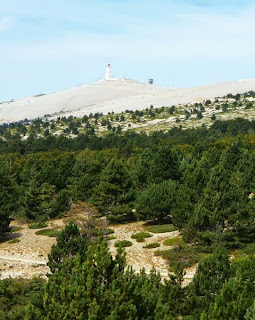 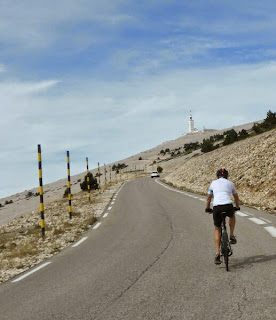 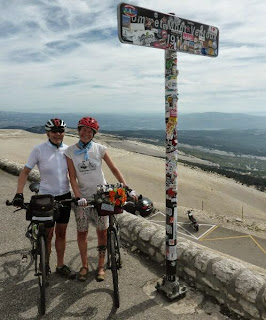 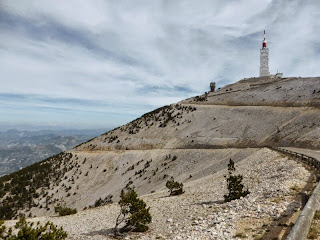 Very, very exciting day today as we cycled our own mini Tour de France stage, which included the ascent of Mont Ventoux.
We stayed overnight in Bedoin, legendary starting point for the Ventoux climb. Just on the edge of the village is the kilometre zero sign, and then it is all uphill for 22k.
It was an excellent day, not too hot and importantly, almost no wind. We climbed steadily through the trees, stopping occasionally to chew on cereal bars and drink Lucozade, After 16k we arrived at Chalet Reynard - a café where we sat outside with coffee and ate  big chunks of Soreen cake that we had left over from our Scottish mountain climbing days.
Once past the café the vegetation disappears and it is a completely exposed all the way to the top.  We finished in good style after just under three hours of cycling, and in about 13,000 place out of 14,000 rides that were recorded on Strava. (Top place on Strava was 51 minutes.) Not too bad for me, but I think Daz would have been faster on his own.
He certainly was on the descent on the other side down to Malaucene. I was more worried about the descent than getting to the top and had my brakes on loads - my top recorded speed was 49.9k per hour and Daz did over 70!
Once back at ground level we headed back to Bedoin to complete the brilliant round trip.
We climbed 2,023 metres and cycled 55k in total.
Ps, we both found it much easier than our journey around Mount- St- Victoire a few days ago . Maybe it had something to do with the fact that all we had to eat on that outing was half a Bounty bar at the end and a glass of wine half way round.