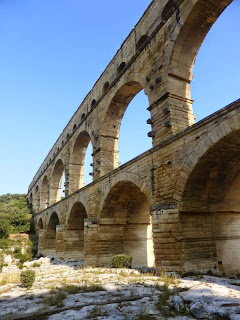 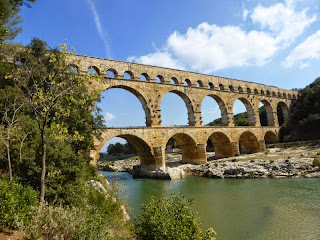 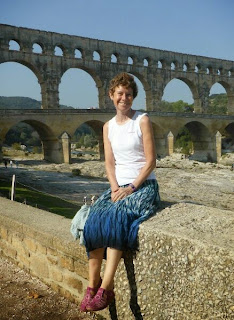 The Pont du Gard is an ancient Roman aquaduct that was built almost 2,000 years ago. It carries water over the river Gardon and is part of a 50k long canal that was built from Uzes to Nimes.
Apparently, the Romans in Nimes used more water each day that modern Europeans and were very fond of daily hot baths, so the water was needed as the town expanded.
The bridge is enormous and is the highest of all the Roman aquaducts. The water was carried in a channel on the top layer, and immediately after the bridge on the southern side it disappeared into a tunnel through solid rock.
We spent ages wandering around, looking at the bridge from different angles, then sat down for a well earned cafe creme and fruit tart.
Amazing place today, but can you imagine how unbelievable it would have been if you lived 2,000 years ago, walked around the bend in the river and suddenly came across it?