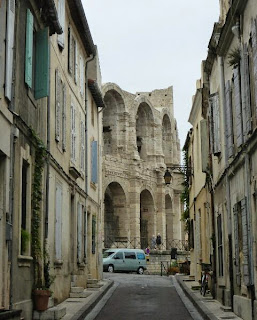 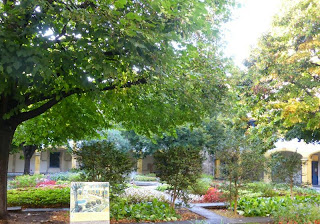 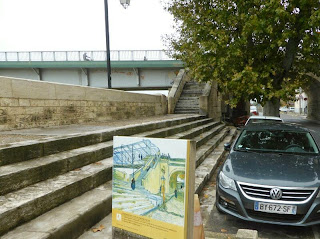 Have you ever paid to visit an art exhibition and then been that disappointed that you went back to the information desk and asked for your money back? Not only that, but you tried to explain to the manager, in a foreign language why you thought their exhibits were not very good?
Well today I have and it was a bit stressful.
A bit of background - it rained heavily all morning so we decided to go to Arles to see a bit of culture. Arles was founded by the Romans and there are many beautiful remains all around, and it was also where Van Gogh lived for a while and painted over 200 pictures.
We decided to visit the Foundation Van Gogh to find out more about his life in the town. There was also two modern artists exhibiting their work at the Gallery.
It sounded good so we paid 9 euros each and headed in. First was the modern artists, who were exhibiting paintings based on Van Gogh's work. 'Sunflowers' was two oblongs, one yellow and one orange next to each other, opposite a mirror with swirly patterns that looked like they were made from frothy washing up liquid and a dishcloth.
I wasn't very impressed but was looking forward to the Van Gogh section, only to find that there wasn't one!
Perhaps I was a bit bolshy, but it only took us a few minutes to look around and it was very expensive. I decided to ask for some money back and eventually the curator, Valerie, came down to see me - Daz carefully stayed quite a distance away.
She was very nice, we had a chat and she gave me our money back, telling me to come back next May when they do have a Van Gogh exhibition - I don't think she meant it though.
We spent the rest of the afternoon looking at the gigantic amphitheatre that is right in the town centre, and following the Van Gogh trail around town. It was quite clever and showed a copy of his painting in the exact place that he painted it.