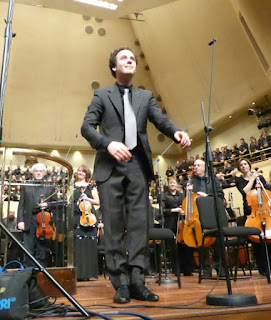 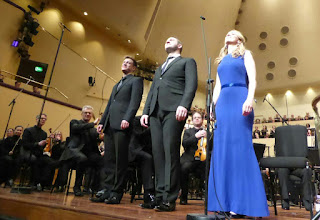 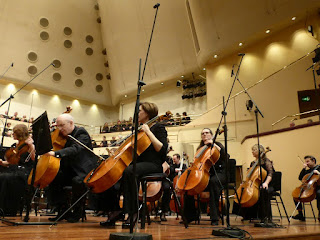 Yet again we are inside a concert hall, this time it is in Nottingham. The tickets were a really good price, and Darren got the middle two seats on the front row.
Surely they must be the best seats in the house - or so we expected.
However, once we were in our seats our faces were less than six feet away from the conductor's shiny shoes, and the singers towered way above us.
With our heads tipped back we could see all of the action, and the singer on the left sang with his mouth so wide open and pulled such funny faces that I could have see how many fillings he had.
The concert was by the BBC Symphony Orchestra and we were expecting it to be full of well known classics.
Unfortunately it wasn't, but it was very lively with a lot to look at as well as to listen to.
We recognised Carmina Burana which was written by Carl Orff, and is the music to the Old Spice advert.
The section we knew lasted for about three minutes, but the actual piece went on for over an hour. I did start to wonder if it was ever going to end, but eventually they repeated the Old Spice section as a finale, and then it was over.