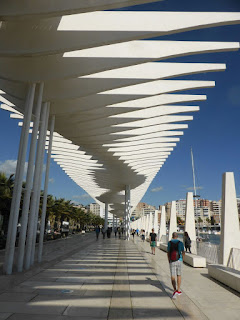 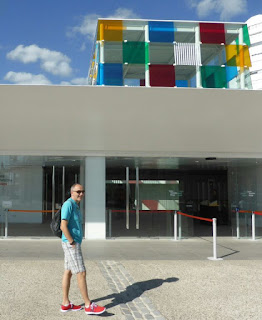 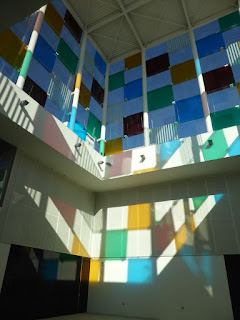 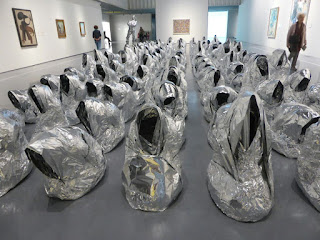 We caught a bus along the coast today to Malaga, mainly to do a bit of shopping, but also to visit the Pompidou Centre.
We were in Malaga last year on the day before it opened, so we were looking forward to getting inside the building this time.
The entrance is dramatic and is underneath a multi coloured square box that reflects light all around the inside of the building.
All of the exhibits are on loan from the Pompidou Centre in Paris, and I surprised myself by actually liking some of the pieces.
In the main hall an installation called 'Ghost' consists of 102 sculptures in aluminium foil taken from body moulds. I was quite taken with it, and found it very moving to see the empty shells and dark interiors.
Best of all though was my chocolate muffin in the café. The waitress disappeared into the kitchen with it and appeared a few minutes later with it elegantly placed in the middle of a large bowl. She had then carefully piped red jam and cream swirls all around it. I thought that it was much more artistic than quite a few things that we saw in the museum.
Ps, it also tasted pretty good too.