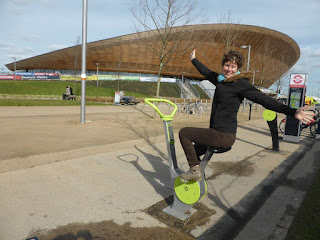 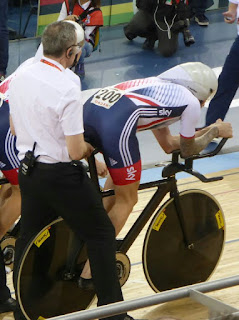 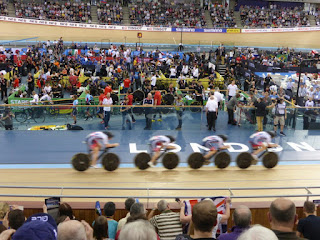 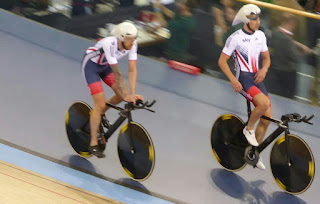 The world track cycling championship is being held in London this year and as we arrived I practiced a winning celebration on the exercise bike outside.
It was a bit of a cheat really as I have never learned how to balance without holding on tightly to the handlebars, haven't put in any winter training and obviously haven't been picked in the team.
Once indoors I was pleased to find that we had an excellent seat, right behind the start line.
All of the cyclists were supported on their bikes before the gun was fired, and here is a slightly painful looking example featuring the rather well known cyclist - Sir Bradley Wiggins.
Very soon the cyclists were whizzing around the track with the crowd cheering wildly for the British racers. It is easy to take hundreds of blurry shots, so I have just included one example.
Brad and the boys won their heat this afternoon, but unfortunately at the evening session, when we were elsewhere, they only managed second place behind a fantastic Australian team.