The day started well, as the expected torrential rain did not make an appearance, and my flooring delivery arrived nice and early.
Daz and I managed to drag it onto the high scaffolding and batten it down.
Next on the list was to correct a mistake that I made yesterday. We had carried all of the spare white bricks up on to the high scaffolding and then this morning I realised that Trevor now didn't have enough to finish the wall lower down.
Cue my plan of filling a blue IKEA bag with bricks and using the hoist to get it up on to the scaffold. This went better than expected until the handset started smoking, and an investigation revealed that water had got into it.
By the time Trevor arrived very late after his own problems, we had reverted to making a Blue Peter style makeshift rope and dragging the bricks up by hand.
It then got worse as we also had to drag the incredibly heavy mortar buckets up the same way.
I would have taken a photo but I was getting a bit tired and mardy by then.
Also at the back of my mind was the scaffolder issue. However, when I did phone him to say that we wouldn't be ready, he was fine and just said to let him know when we would be ready.  Have I misjudged him?
The rain then started hammering down and we are already paddling around, so it's a worry. Here is the sad state of our kitchen and living room. 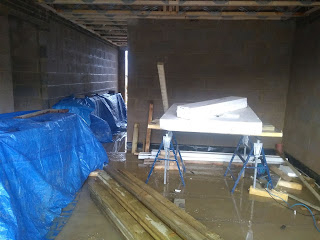 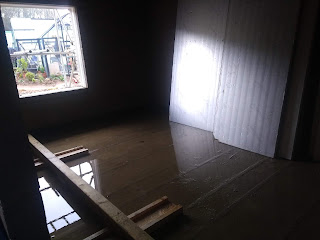 Daz has ordered a new hoist that arrives Saturday and we then went shopping to cheer up.