Darren had the excellent idea of putting a cctv camera inside the garage. The reasoning for this is so that we can check that the door is closed when we are not around. However, it also captured footage of an intruder.

A couple of days ago I was in the garage and noticed that a bag appeared to have chew marks on it, and my guess was a mouse was around. Straight away I mixed up a bit of mortar and filled in the small gap either side of the base of the garage door. I also took all of the outstanding rubbish to the tip.

Darren went in this morning and picked up a roll of insulation from a shelf.

He wanted me to title this blog 'when mice attack', although after watching the cctv closely I think that he is exaggerating slightly.

He tells me that a cute little mouse had made a nest in the insulation, and it tried to attack him! It made him jump so much that he threw it away and screamed.

I am guessing that the mouse was more scared than Darren as it probably thought that it had a home for the winter.

Hopefully it made it back outside because I am quite confident that there is no way in or out for it now.

In the meantime I have been painting, painting and painting, although Darren has set my turbo trainer up in the gym now so I have done a little bit of cycling too. 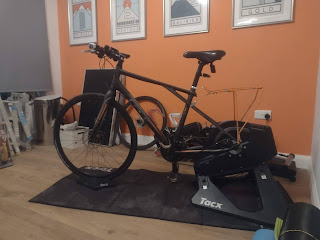