We were on edge all yesterday morning because the building inspector was coming to see the house. We haven't seen him for many months, and have had to make many decisions in his absence. We weren't sure if we had always done the right thing, so were keen to hear his opinion.

However, it went well and he was very complimentary. He took a couple of photos, but they were of the kitchen because he liked it, and the picture wall that I put up which has the architect's plans and drawings. 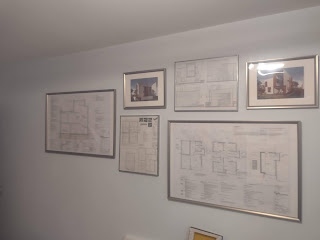 Phew, what a relief, although there are still a few items that need to be ticked off.

Today Darren decided to try to tackle the ongoing issue of the MVHR machine and its giant tentacles. How could we make the room into a store cupboard?

After a lot of thought we decided to put a shelf above the pipes with some sort of curtain underneath and boxing in above it. It's in the very early stages, but he cut the shelf out in the garden - just got to see if it is going to fit. 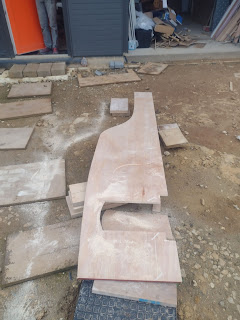 And after a couple of alterations it did! 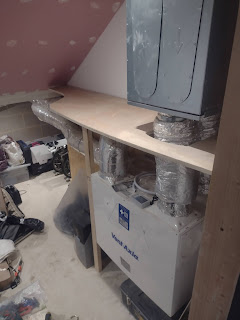