I am having a 'get fit' phase, and my bike turbo trainer is now up and running. Darren has set it up and apparently I can choose from hundreds of different rides to go on.

I decided to go for a nice, easy and mainly flat one, but couldn't work the computer properly. Darren was busy chopping things up in the garden, so rather than disturb him I chose the only ride that I could see. It was called Marmotte 4 to Alpe d'Huez.

I thought that it would go along the valley floor and stop at the bottom of the hill, but after cycling for a couple of minutes it became apparent that it wouldn't. 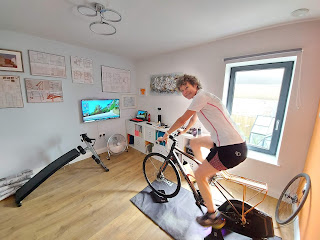 At least I had the right kit on, and a handy bottle of water on the bike, because this ride was going all the way to the top. 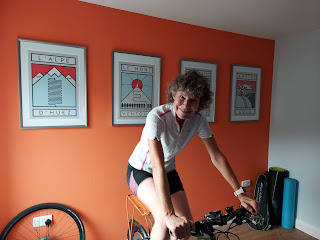 I cycled for exactly an hour and by then my bottom and legs were getting so sore, so I paused the ride for the day.
I cycled round about six or seven of the famous hair pin bends and I have the poster behind me for inspiration.
I think that another couple of hour long sessions will get me to the top so I am going to continue it tomorrow, as long as my bottom can cope with that.
Ps, exciting day today because we are actually going out to Oxford later for a meal with S and P.