Time has flown by

I have just realised that I haven't written a blog for ages, but life hasn't been very exciting lately.

We have been busy preparing our VAT refund claim on the house build, and have collected every receipt for material used to build it. It's quite a complicated process and not everything can be claimed for, so we have had to check every item. It's almost done now and we have a pile of 400 receipts to send off. Phew.

A few months ago Darren bought me a new mobile phone with a supposedly brilliant camera feature. I kept trying to use it and it has about ten different settings,but everything I photographed came out fuzzy and faded, so in the end I gave up with it. Last night Darren borrowed it to take a photo and found out that the lense was covered in a protective plastic covering.

That was very annoying and a bit embarrassing, and this morning I went to try it out and took some arty shots even though it was dark and trying to rain. 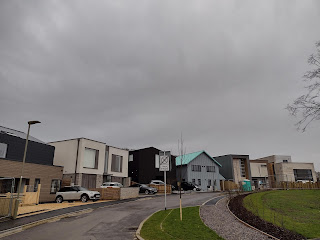 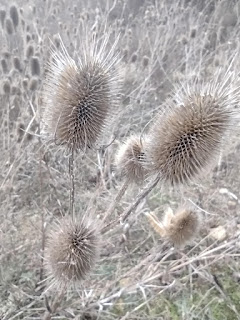 It has been born again and works excellently. The top photo is of our street, and we are right at the other end, and the above is a random teasel.

Another task that has been taking up my time is the floor of the greenhouse. I saw some mosaics on line, and decided to give it a go myself. We bought some stones from Wickes along with sand and cement and I made a start. 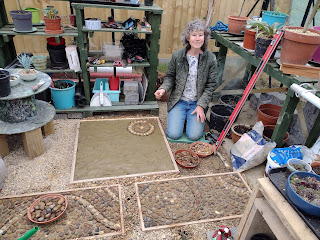 It was a bit trial and error, but I found out while making the first one that it helps massively if you sort the stones into similar shapes and colours before you start. Also, it's very important not to walk on it until the concrete has completely dried! Naming no names. Apart from that, it's just good fun. 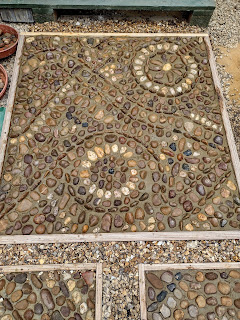 Today's effort, concrete mixed by Darren, which is the hardest part of the job.