After a very later night I woke up at 7.40am and whispered to Darren, 'do you still want to go'. Half hoping for a 'no', he said that he would still quite like to, so after a couple of minutes hesitation, I got up and put the kettle on.

By quarter past eight we were on our way to Southwark underground station, we caught the train for about five stops, then I tried to navigate the final walk on my phone. After a false start due to coming out of the wrong tube station exit we were back on track and then at Victoria Docks.

Amazingly when we got there a couple of ladies were getting undressed down to bathing costumes, and later we saw them swimming in the water. 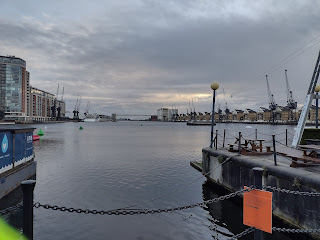 They aren't in the water in this picture, but what a crazy place for a swim.

Just around the corner was the start of the parkrun, and we had to run two laps along the left hand side of the photo. 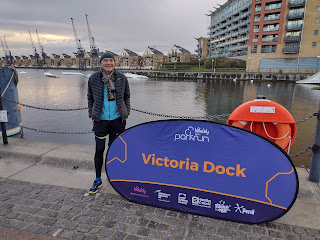 It was a very cold and windy day, and not a huge turnout, but Darren was 32nd and I was 59th. 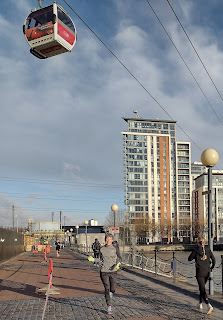 Finally we just had to reverse the journey, get some breakfast, then the train back to Bicester, walk home from the station and then put our feet up.

Ps, nice run with great views of the docks, the cable car and the Millennium Dome.