We drove to the station and caught the train to Birmingham New Street. There was a lovely reception from all of the Games' volunteers and they directed towards the action. What I wanted to see first was the giant bull from the opening ceremony. 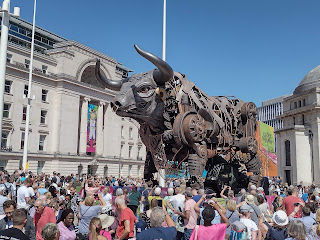 It was extremely popular and there must be millions of photos of it by now. We managed to get up close for a quick snap. 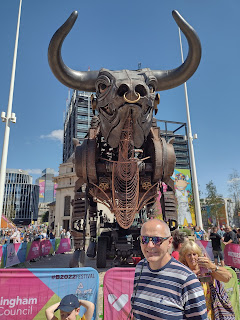 Afterwards we headed back to the station and caught the train to Birmingham University, which was the location of the squash competition.

Lots of photo opportunities on the way, and the giant deck chair was very comfortable. 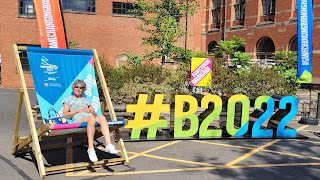 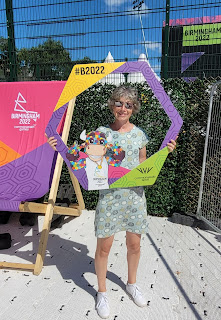 The weather was gorgeous, but we were indoors for the afternoon and evening watching the gold, silver, bronze and 4th place matches at squash.

We haven't seen a match since the Commonwealth Games in Glasgow in 2014, but since then the men seem to have got so unbelievably good that it was almost impossible for them to win points off each other. Unfortunately, the rallies went on so long and were spectacular, but in a strange way could become almost boring. I don't know how better to describe it.

However, the women were incredible and to be honest, more enjoyable. Good results for England with a bronze and gold medal, and a 4th for James Wilstropp.